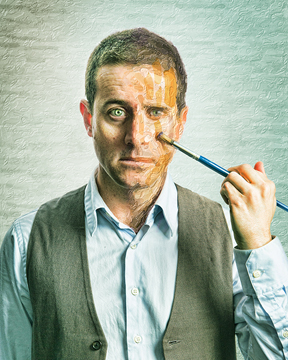 × Art, politics, greed, ambition, love and murder intertwine as legally blind painter, actor and playwright Bruce Horak (This is Cancer) uncovers the truth and lies behind the mysterious death of one of Canada’s greatest artists. Horak is a critically acclaimed Visually Impaired artist who lives with 9% of his vision and over the last two years has painted a series of over 400 portraits that attempt to capture the way that he sees (which comprise an exhibition of his work named The Way I See It). As he tells his own story and shares the unique way he sees the world through an original LIVE-painted portrait of each new audience, he delves into the controversial tale of Canadian Group of Seven painter Tom Thompson’s unsolved murder.

A Monster Theatre production in association with the Firehall Arts Centre.

Written and performed by Bruce Horak. Directed by Ryan Gladstone.