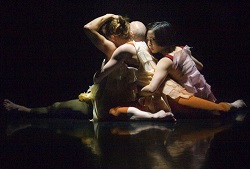 × coalesce and armour are companion pieces inspired by the scientific essays of Lewis Thomas in his 70’s classic The Lives of a Cell, and performed to an electro-acoustic score by Debashis Sinha. Canadian dance icon Peggy Baker’s trio, coalesce, is a complex and unpredictable inquiry into the nature of communication inspired by the mysterious and interconnected world of insects. armour, choreographed by Doug Varone, pairs Baker with Bessie Award winning dancer Larry Hahn in a spare duet that entangles the couple in a visceral act of connection.

The Audio Action Tour follows an unique two-act format which features presentations by Peggy Baker and the dancers on the methods and inspiration behind the choreographies in act one, followed by a fully-staged performance in act two.

Peggy Baker explains the origins of the piece:

“The company presented this program at the 2012 Harkness Dance Festival in NYC in a two-act format called Stripped and Dressed, devised by curator Doug Varone. For the first act, I spoke directly with the audience, sharing the inspiration, methods and materials of the choreography, and the dancers demonstrated aspects of it to reveal stages of exploration, development and refinement. The second act was a fully lit and costumed presentation of that same work – my trio coalesce, and the Varone duet, armour, acquired in 2010. It was a really successful format, and we’re thrilled to be presenting it at the Firehall in January.”